Julie Madison is the first person to swim the 21-mile circumference of Longboat Key. 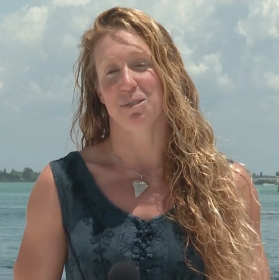 Madison was also the first person to swim the 17 miles around Anna Maria Island, which she’s done twice since December.

Madison fell in love with Longboat Key after swimming around Lido Key about seven years ago.

Madison said there were many differences in her Longboat Key and Anna Maria Island circumnavigations, in addition to distance. The water was much choppier this time around. She just completed the Longboat swim of over 20 miles in  11 hours and 25 minutes.