Focus on the Serve & Volley 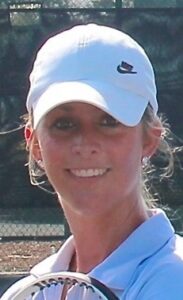 If your opponent starts serving and volleying, focus on the ball and not on the movement of your opponents.  Have a preplanned game plan of how you are going to return based on the serve you receive.  If your opponent has a strong serve, an appropriate return to neutralize the serve and volley is a lob over the server’s partner’s head.  Down the middle and low is always a good return.  Try to make sure if you can’t lob or pass your opponent that you hit your shots nice and low at their feet. Positionally, stay one-up one-back as the receiving team unless you are not having success.  If you are getting attacked off your return then I highly suggest having the receiver and the receiver’s partner at the baseline. Having both players at the baseline, gives the serving team a different look which alone can cause good results.  Playing both back takes pressure off the receiver so they aren’t pressured to hit a perfect return.  If the receiver’s partner is at the baseline they have a

better chance and more time to defend themselves if needed.  The receiver’s partner can always resume their position at the net if their partner hits a good offensive lob, or if the serving team stops serving and volleying.