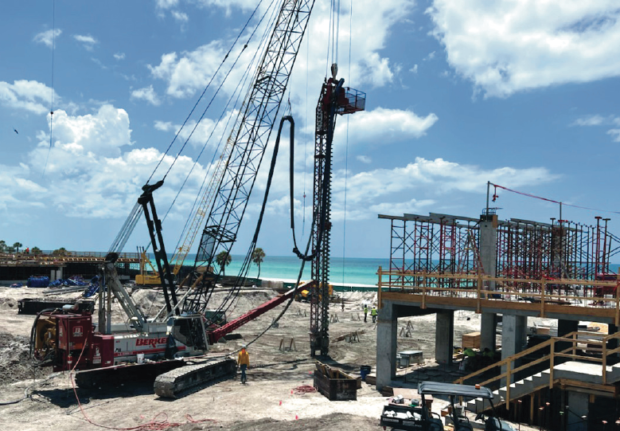 If you drive by the south end of Longboat Key and look toward the Gulf of Mexico you see an unprecedented flurry of activity at the former site of the Colony Beach & Tennis Resort at 1620 Gulf of Mexico Drive.

More than $250 workers from Moss Construction are on site building the St. Regis Hotel and Condominium Resort Longboat Key project that developer Chuck Whittall says is completely sold out.

Last Friday, Whittall told Longboat Key News that the project is ahead of schedule and all 69 condominium units have been sold on the 17.3-acre site.

He said when he first started his involvement at the Colony when it was a morass of litigation, he thought that if he ended up developing the site the condominiums would be worth $5 to 6 million at best. He just sold the top priced unit at the St. Regis for $25 million dollars.

Over the summer, residents and people driving by will see the completion of the first condominium building located on the southwest portion of the site and the hotel is currently being erected on the northwest section of the site.

Whittall, who owns two units at the project, said he stood at the future floor of the sunset bar when they poured the concrete last week in the view was “amazing.”

He said in about 24 months he will be handing the keys over to Marriott to operate the resort.

For years, Longboaters read in newspapers about ownership struggles and legal battles. After this lengthy and costly battle, Whittall said he is extremely encouraged that the market has been so robust and the timing could not have been better. Also the long time it took for the approval of the project meant the supply chain and the materials were already on order so construction is moving swiftly.