After more than a decade and tens of millions of dollars in attorney fees, the St. Regis Hotel and Residences earned a final unanimous vote and construction will begin on Monday, Oct. 25. 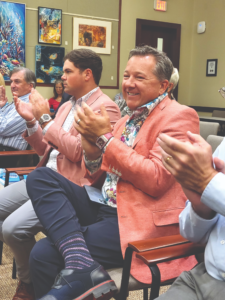 The Longboat Key Town Commission took about four hours last Wednesday to render a unanimous decision to allow 69 condominium residences and a 166-room hotel to be built with a cadre of amenities on 17.6 acres that sprawl along the Gulf of Mexico on the south end of Longboat Key.

“This has been the longest approval process, and by far the most complicated and costly, but in the end it will be the crowning achievement for our company,” said Unicorp President Chuck Whittall after the vote.

Whittall told Longboat Key News before the meeting he had adjusted the plans to quell concerns raised by commissioners last month that there was not adequate parking allocated to the hotel even though there was more than enough parking to meet the requirements for the entire site. Whittall also had to face worries that a proposed Monkey Bar, which is a tiki-like bar paying homage to the former Colony Beach and Tennis Resort, was too close to the erosion control line. A couple of commissioners also worried that a proposed event pavilion needed to be relocated landward.

Whittall solved the parking issue by incorporating vehicle lifts that will allow stacking of cars and take no more than 30 seconds to raise or lower by valet staff.

Commissioners debated the minutia of the size and operation of the lifts, but in the end took staff’s recommendation that the proposal would now exceed the necessary parking required by town code. Whittall said at the meeting that in the future he may come back to add additional parking closer to Gulf of Mexico Drive.

The official beginning of construction will take place on Monday, Oct. 25, at 10 a.m. when Whittall will host a groundbreaking event, marking the first positive sign of development since the former Colony Resort was closed more than 12 years ago.

The successful approval of the Outline Development Plan and Site Plan by the commission means Whittall can start site work next week when he said crews will begin removing old pipes and utilities, grade and level and prepare for construction footers.

Whittall said more than 60 percent of the project is sold with prices ranging from the high $2 million to almost $20 million for the penthouse units at the residences. Whittall announced last month to buyers under contract that he had to increase the sale price by 13 percent to help offset a steep increase in construction costs. Unicorp has contracted with Moss Construction, and Whittall said now the construction cost is more locked in.

The commission did allow for the construction of the tiki bar at its seaward location and reasoned that the amenity will be a signature asset to both the property and the town and an overall improvement of the plan. The event pavilion was not approved to be built closer to the Gulf than allowed by code.

Former Vice Mayor Ed Zunz was the only speaker who implored the commission to not approve the plan that day, but to continue the meeting for more information and discussion. That sentiment was countered by former Mayor Terry Gans who commented that, “If you go into every inch, every bolt and every grain of sand instead of the philosophy that should guide you on what is best for the town, then you will have squandered this most precious opportunity. To look deep down at the totality of what is there, that is what is significant. There always will be people who say we need more information and more time, but let’s not allow the perfect to become the enemy of the good,” said Gans.

Vice Mayor Mike Haycock said he believed that the tiki bar was part of the heritage of the site and he led the move to allow it at a more seaside location. The request by Whittall was to allow the construction of the Monkey Bar 108 feet from the erosion control line, instead of the 150-foot dictate in town code. The process Unicorp used to develop this site, allows departures from the strict confines of town code if the commission believes an overall improvement to the plan is rendered.

Mayor Ken Schneier agreed, and the tiki bar departure from code was allowed.

The commissioners with the exception of Penny Gold, were not in favor of allowing the event pavilion to encroach on the erosion control line.

In the end, the commissioners consolidated their votes to reflect a unanimous approval.

When Whittall came to the podium, he spoke of the halo effect, both economically and situationally in the destination marketplace that the St. Regis brand will have on Longboat Key. He told the commission that he and his company will retain ownership of the St. Regis Hotel and that a 50-year agreement is in place for the facility to be managed under the St. Regis flag. He added that he will own a penthouse in the unit, and he plans to put it in a trust for his daughter as a legacy asset not to be sold.

Mayor Ken Schneier who has witnessed the Colony decline and presided over the final votes said he was impressed and felt that “this is an incredible project that you have brought forward with an incredible amount of perseverance.”