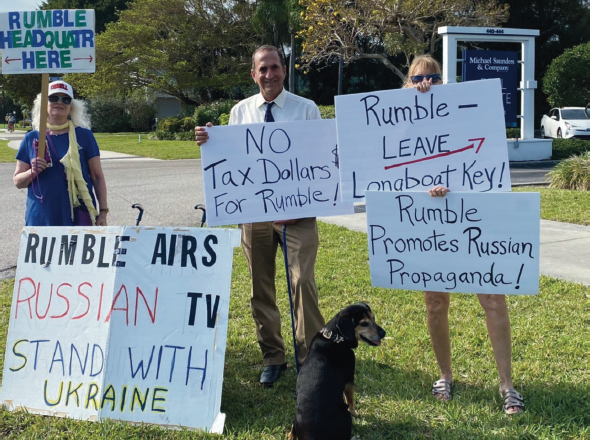 There has been much outrage lately about the Russians coming to Longboat Key, next door to the popular Dry Dock restaurant, from which it is renting a magnificent bayfront office complex.

It’s not like Alan Arkin is landing his Russian submarine on a small island off the East Coast of America. In that great 1966 movie spoof, Arkin played a friendly Russian submarine captain who meant no harm to the island dwellers.

Today Russians, or more precisely, Russian troops are not so friendly and are being rather horrid and murderous in Ukraine.

As befitting our age,  this new threat of a Russian invasion is via the internet, cyberspace, if you will.

RT (Russia Today) the Russian state news channel will make its only US home, via Rumble, (an online platform like Google) on Longboat Key.

In the last month RT has been banned and de-platformed from all other major technology platforms  –Twitter, Google, YouTube,  Facebook and Roku. All Major cable TV networks in the U.S. and Canada have dropped the outlet, and the European Union has banned it completely to stop the spread of Russian propaganda.

Rumble claims it will be creating 165 new jobs and will invest upwards of $50 million in its new home at 444 Gulf of Mexico Drive. The popular Dry Dock restaurant is part of the Gecko hospitality group, which has over 6 restaurants in the Sarasota area and did not comment on its new tenant.

When the grant was approved by all 5 Sarasota Commissioners, they were not told the name of the company they were giving money to. That information was confidential protected by state statute. The company called itself “Project Sunshine” in its application.

“I was disgusted,” said Doreen Dupont, who lives at Country Club Shores in LBK, “How could we let these people come to Longboat Key, just down the street from me?”

In March she stood out in front of the Michael Saunders office complex at 444 Gulf of Mexico Drive with home made signs that read:

STAND UP FOR UKRAINE

Traffic was so jammed up that Saturday that many motorists took time to honk their horns and give her a thumbs up as they drove slowly by. One Amazon truck driver, who was originally from Ukraine, stopped, and hooked her up with a local Ukrainian Facebook group which was highly supportive.

Only one Longboat Key couple seemed to disapprove,  “we stand with Trump,” they told Dupont as they walked by on the sidewalk.

Dupont said that ultra right wing groups support Rumble and that Trump is “partners with them.”

“I didn’t want to make this political, and added that she was angry that the Sarasota Democratic Club asked the County to cancel the grant.

More than a thousand residents, including many from local Ukrainian groups, signed a petition asking Sarasota County to rescind the grant approval to the company

Indeed Donald Trump did partner with Rumble to provide technology and cloud services for Truth Social, Trump’s attempt to host a new internet, after it struggled on its own.

Trump said he picked Rumble because it’s one of the providers “who do not discriminate against political ideology.”

Rumble has a verified account for the former president, who was removed from most major social networks after the Jan. 6 riot. The account, with 500,000 subscribers, has been used solely to repost Trump’s speeches at rallies and appearances on Fox News.

Alex Jones, who described the Sandy Hook massacre of children in Newtown Ct. as a hoax, has 100,000 followers on Rumble.

But Rumble also hosts a number of more mainstream, but leftist journalists like Glenn Greenwald, who wrote about Edward Snowden’s revelations detailing mass illegal domestic phone records surveillance by the NSA. Rumble also hosts former U.S. Representative (D) Tulsi Gabbard, who ran for president and has espoused views not accepted by either the left or the right.

Popular among conservatives, the video platform is endorsed by Florida Gov. Ron DeSantis.

“We are thrilled to welcome Rumble to Florida, and we support its mission to promote free expression and stand up to Big Tech censorship,” DeSantis said in a news release announcing Rumble’s Longboat Key move.

Rumble claimed that it intended to create 165 jobs with wages averaging $170,000 for management positions and $80,000 for other jobs. It would receive the job incentive grant over the next ten years.

Rumble’s CEO Chris Pavlovski bragged that the video platform was growing so fast, close to 50 million monthly average users in the US, that it was forced to build a new US headquarters and chose Longboat Key because of its “friendly business climate, its proximity to tech resources, and the potential for further development. It is a win-win.”

Pavlovski spends his winters in LBK, according to one resident, but he did not confirm the information.

Rumple has also been accused of distributing misleading health information. Wired Magazine did an investigation that found that if you search for vaccines on Rumple, you are three times more likely to be recommended videos with misinformation about Coronavirus than accurate information.

Maureen Merrigan, LBK Commissioner, brought up the issue at the last Commission meeting. She asked if any town monies were going to Rumble and was assured by Tom Harmer, Town Manager, that LBK was not putting up any money. She said, “We are all sickened by what is happening in Ukraine,” and promised no Town funds are being used to support the company.

Glenn Greenwald said in an interview with The Washington Post that he sees Rumble as a way “of liberating ourselves from the control and oppression of Big Tech monopolies’ censorship and tyranny.”

“I’m not uncomfortable if people are out there saying things I disagree with. … This is a very recent phenomenon online: We expect our platforms to be cleansed of people we dislike,” he said.

Greenwald recently tweeted that the growth of alternative tech platforms like Rumble provokes establishment forces to swing hard and attempt to stop the rise of competitors:

“Any time a new platform grows to compete with corporate media and, more so, that they cannot control and force to censor, of course the media will malign them. Here, the NYT makes clear the real philosophy of Rumble: to trust citizens, not FB (Facebook) & Google, to decide what we hear.”

Greenwald added that the top creators will be paid in the “midrange six figures.”

“Many writers, from across the political spectrum, have been censored or excluded from mainstream platforms and Rumble gives these voices a chance to express themselves without having to worry about baseless attacks by the government or other self-appointed gatekeepers.”

Whether Rumble will succeed is an open question. It may never deliver those jobs and investment to Longboat Key. In the end Rumble is still a digital David taking on Google’s Goliath.

Rumble tweeted about its relationship to RT. “The mainstream media has spent the day disseminating a completely false and misleading story about our relationship … to RT.

“Rumble is a neutral video platform, built on the belief that all creators should have the opportunity to freely express themselves and reach their followers without censorship or restrictions. You cannot fight aggressive authoritarians by surrendering a key principle that separates us from them.”

The fierce debate over Rumble and RT is fundamentally about balancing the right of free speech with the threat that disinformation poses to the stability of our society.

But if we can’t have a window into what our enemies are thinking and saying and propagandizing, how can we arm ourselves to effectively confront them?

Responding to the public outcry, last week the Sarasota Commissioners seemed to be reconsidering the wisdom of the grant.

But leaving the free speech issues aside, should taxpayers be giving Rumble  $825,000?

Or maybe, as some have argued, there is this crazy idea that all newspapers should be given a public subsidy.