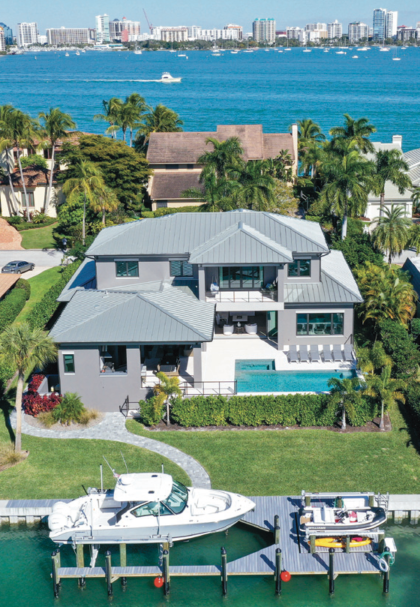 The sale marks the latest in numerous records as the area market soars. Additionally, buyers appear willing to pay a premium for new construction or renovations.

“What is most interesting is that the highest price paid is on a canal and not on open water,” said Rhinelander.

Rhinelander said it is an embodiment of the trend toward new construction.

Rhinelander should know. On Bird Key, where Rhinelander is also a resident with his wife Jackie Bohannon and their son, he has made the redevelopment of older properties something of a specialty.

Rhinelander bought an older home on Partridge Circle in Bird Key, himself, and developed plans simultaneously for that property as well as the Meadow Lark Drive property. Rhinelander represented the buyer at Meadow Lark in 2019 and subsequently worked with the owner in developing the property.

Rhinelander sold the home he bought on Partridge as soon as he finished, whereas the family he developed the home for on Meadow Lark Drive lived there for about a year. When the owners saw the intensity of the current market, they asked Rhinelander to list it and he sold after one day of showings.

The previous record sale ever on Bird Key was 643 Mourning Dove Drive at $6.9 million, which sold in 2006 and faced open water

Rhinelander is now working on four other homes he is developing on Bird Key with two on the canal on Bob White, one on open water, and one on Bird Key Drive, which faces the Yacht Club.