The idea of adding potentially hundreds of hotel rooms to St. Armands Circle as well as 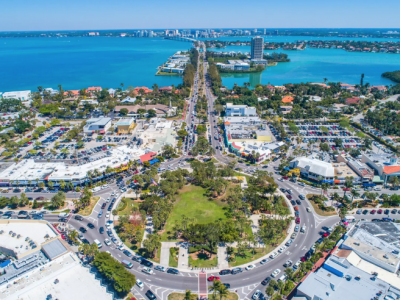 dramatically increasing building heights will be a hot discussion topic at a joint meeting on Monday, Nov. 8 between the Longboat Key and Sarasota City Commissions.

Although several other items including an update on the Gulfstream roundabout as well as a state-of-the-union on the progress of the St. Regis Hotel on Longboat Key is on the agenda, it is the idea of adding additional commercialization, tourism and potentially traffic to St. Armands Circle that is weighing heavily on the minds of Longboat’s leaders.

In the past, the Town of Longboat Key battled both the City and Florida Department of Transportation on any project perceived to impede traffic flow, emergency evacuation, as well as the general lifestyle for residents of the barrier island.

The latest plan by the City of Sarasota Commission, which involves soliciting development proposals that would involve selling the two-acre Fillmore Parking lot, located behind Alvin’s Island on St. Armands Circle, has both the Mayor of Longboat Key and its Town Manager on alert.

“We are watching this very closely, we are very concerned with any plan that would add traffic or impede the flow of traffic from our island,” said Longboat Key Mayor Ken Schneier.

The idea of selling the Fillmore Parking lot came through an unsolicited offer by Gavin Meeshad and his development team last August. That plan centers on constructing a gourmet grocery market as well as a hotel on what is now a public parking lot. Currently, the zoning does not allow any hotel units on St. Armands Circle or on the Fillmore Parking lot and Meeshad suggested and is promulgating a zoning text amendment and comprehensive plan change to allow up to 150 hotel rooms per acre throughout the St. Armands District, as well as increase heights to 45-feet above FEMA elevation requirements.

If these plans were adopted, the Circle could eventually be built out with hundreds of hotel rooms on second and third floors utilizing the requested increased height throughout the Circle.

Part of the rub in addition to mounting opposition from both St. Armands Circle resident groups as well as the Lido Key residential community is the fact that the repayment of bonds issued to fund the recently-built public parking garage on the Circle, uses the Fillmore Parking Lot spaces as a source of pledged revenue. Meeshad and the St. Armands Business Improvement District sought the construction of the parking garage and the paid parking program to alleviate what was argued to be a lack of parking. Now, Meeshad and the District suggest a better use of the Fillmore Parking Lot would be to sell it for private development.

The City Commission in August by majority vote, asked for proposals from any developer interested within a 90-day window. That window closes at end of day on Nov. 14.

Sarasota City Planning Director Steve Cover said that the City had not been planning for the sale of the lot and no studies, long-range planning, nor engagement with resident groups, surrounding municipalities, nor a traffic study has been performed.

City Attorney Robert Fournier said the bonds for the parking garage are predicated on the existence of the parking spaces and that any tinkering could prove problematic and the City would have to carefully consider any financial arrangement that alters the pledged underlying revenue sources.

The City has not engaged in any formal process to sell the property, nor has any formal engagement with a commercial broker but the City expects at least four proposals from area developers.

Surrounding residents have been battling for years a massive expansion of tourism uses through AirBNB and VRBO and Homesharing, which have led to increasing code enforcement as well as several resident groups seeking relief from the City to what they say have been an ongoing through to the coveted residential real estate neighborhoods surrounding St. Armands.

No area on Lido or Longboat Key has a density close to 150 units per acre in its tourism zones and some opponents have cited that hundreds of future units are already approved but have not been built including the St. Regis Hotel, the Lido Sandcastle, which will replace the Helmsley Sandcastle, as well as a future hotel and condominiums on New Pass that have been approved by the town of Longboat Key.

Lido residents have expressed a desire to see the efficiency of the roundabout under construction on Gulfstream Avenue before any approvals are given since the Ringling Bridge serves as the point of evacuation for thousands of island residents.

Anyone interested in attending the joint meeting, should go to Sarasota City Hall downtown at 1:30 p.m. on Monday, Nov. 8.