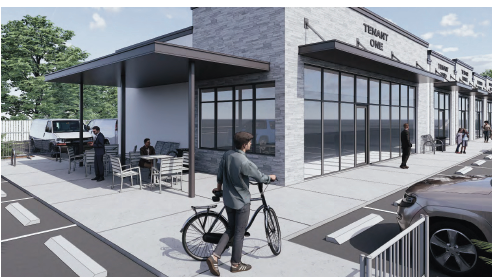 Where there was once a thriving forest, now sits a pile of chopped up debris and mud which has been an eyesore to anyone driving on Gulf of Mexico Drive for about a year.

Last week, the LBK Planning Board gave unanimous approval in a 7-0 vote for the construction at 3150 GMD of what can only be called a drab Strip Mall, reminiscent of the architecture of the 1950s and 1960s, which to many, might even be more of a permanent eyesore for decades to come.

For some time, many of the local residents have been concerned about what was going to be built, after the forest was cleared. They suspected that their quiet residential neighborhood would be sullied by ugly commercial development and acted quickly to protect their vistas and property values. The Buttonwood Harbor Homeowners Association, along with neighbors to the east on Winslow Place, contacted Brista developer Mark Ursini. They worked for many months to cobble together a secret deal to split the land up and rezone the southern parcel on Buttonwood from Commercial to Residential, so that those homeowners would not have to be affronted daily by Strip Mall traffic.

This rezoning, to build two single family homes to protect those residents, was passed by a  town-wide referendum last year. Nobody wants their views degraded. But this still left the majority of the parcel zoned commercial. Too bad. Longboat has already long had an overabundance of commercial parcels left over from an outdated zoning plan, according to a former LBK planner.

Bottom line: everyone knows, Strip Malls are blights on the landscape. No matter how much lipstick you put on a pig, it’s still going to be a pig.

So far nothing in the plans appears to protect the view of the thousands of people who drive by every day, or the bikers and walkers, or all the other island homeowners, or the residents and guests of the condos across the street.

This is par for the course in American politics. Special interests and squeaky wheels wind up getting what they want and no one looks out for the common good that affects the large majority – in this case, many thousands.

Nobody knew what was happening until the plans were formally presented last week. When the condo owners across the street found out the plans contained minimal landscaping on GMD, they were, not surprisingly, outraged.

Janice Daly, President of the Diplomat Condo Board wrote to each and every Planning Board member:

“Please consider planting mature trees, buffering shrubs, maybe some type of berm landscaping, etc. to the new development being planned on the 3000 block of Gulf of Mexico Drive. There is a concern that clients visiting the new development may attempt to use the Diplomat Beach Resort’s parking lot, which is privately owned.   This will lead to more foot traffic trying to cross Gulf of Mexico Drive which is already a dangerous situation.”

Cynthia Fenimore, another nearby condo owner, pleaded, “Please do NOT approve such a change to our beautiful island!!”

Other condo owners were troubled about possible illegal trespassing, and more specifically, that patrons of the proposed restaurant might be sipping their drinks, while waiting to be seated, and decide to stroll across heavily trafficked GMD to check out the sunset.

There was a time when LBK planners seemed to be more sensitive to this kind of visual blight.  The large complex at Publix and CVS is sufficiently removed from GMD by landscaping, large trees, and a berm so that it is not visible from GMD and doesn’t really offend anyone.

The Centre Shops – a larger mini Strip Mall (Lazy Lobster),  further up the island, was deliberately designed so that parked cars could not be seen from LBK’s main street. The shops and parking autos are hidden behind lush landscaping and mature trees, therefore softening what could have potentially been an affront to the eyes.

The Longboat Key Town Hall on Bay Isles Road, including the Planning Department, is tastefully set back from GMD by attractive landscaping and tall trees. Parking is not allowed on the building frontage, and is instead clustered to the side and to the rear of the buildings. The same — no parking in front– arrangement goes for the library, the tennis courts, the Episcopal church, the Temple, the Post Office and other commercial buildings on this scenic path.

Steven Schields, who was with the Planning Department for 29 years, explained “when Publix was being built we demanded a lot of landscaping and green swarths. They threatened to pull out a couple of times but we pulled it off. Same thing with the Centre Shops.”

But the climate seems to have changed in recent years regarding the necessity for buffering landscaping and green swarths. The current Planning Department has not been as sensitive to these concerns. A few weeks ago, the Department approved an outdoor Tiki Bar for 150 patrons near Harry’s, which would have been ghastly. Fortunately, this was shot down by the Planning Board and it is now off the table.

Surely something more attractive–and possibly profitable–could have been designed for this Brista development, with mature trees, a berm, and lovely landscaping for this highly visible stretch of the road.

The immediate neighbors get taken care of, but the vast majority of residents and guests will suffer a visual assault that needn’t be.

Most residents — in the town surveys — say they do not want to live in a highly commercialized beach resort like Anna Maria or Clearwater. For the majority, Longboat Key is a different kind of place. That’s why they live here.

Strip malls proliferated in the 1920s at the same time that auto ownership exploded. Everyone was driving everywhere, and consumers liked the convenience of easy parking. Today there are more than 65,000 strip malls in America.

With the advent of big box stores in humongous shopping complexes, strip malls have fallen out of favor. This phenomenon, coupled with the rise of internet shopping, has caused strip malls to become relics of the past.

In the 1960’s, California became the strip mall capital of the world. Writer Walker Percy decried the Los-Angelization of America, an endless string of strip malls, surrounding every city and town.

In the late 1980’s measures to curb mini mall construction were being passed all over the country with L.A. County taking the lead.

To preserve their charm, wealthy resort and retirement towns like East Hampton, Nantucket, Aspen and Carmel all banned new mini malls. These towns exist and prosper as a refuge from the rapidly commercialized rest of the world, and know that their economies will suffer if they kill the goose that lays the golden eggs.

Keep in mind that extensive development has serious environmental implications. For instance, asphalt heats up the climate and creates excess water run offs and flooding which is of monumental concern on LBK.

Land is running out in LBK. Our town leaders should consider it our most precious commodity, and in doing so, more thoughtfully approach the way development will enhance or detract from the livability and economics of the community.

Land that is not physically accessible is often visually accessible. This is very true of LBK. When you drive over the bridge and see the sweeping views of the Gulf, the Bay,  dunes, mangroves and the magnificent green panorama of the golf course and small ponds.

These are our beloved vistas. LBK has one of the most thrilling town entrances of any village in America. As you drive in, the roadside scenery keeps being spectacular. There is a small gas station, and there is a big CVS and Publix but they are not visible from the road. There is  nothing visually jarring until the 3000 block where there is that small existing strip mall with a swimsuit shop and  a muddy field where the new Brista development will go up.

The ongoing battle over development in LBK signifies a maturing process common to many growing resort towns. Will LBK retain its own character as a retirement and resort  community or will it turn into another commercialized wealthy suburb of Sarasota? If LBK becomes more fully developed, more people could come but there will be nothing left for them to see.

Disclosure: The author owns a rental condo across the street from the new development