City wary of latest round of St. Armands Circle proposals 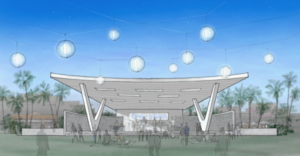 City commissioners discussed the idea of adding an amphitheater to the center of St. Armands Circle last week, and decided to research the idea and the legality of adding an attraction to the circle.

The amphitheater proposal, designed and presented by Tom Leonard, Shore Restaurant owner, would be placed in the same location Ride Entertainment has requested to install a carousel.

The Commission voted 5-0 to further evaluates the amphitheatre idea just as they did with the carousel. Commissioner Hagen Brody said that he is interested in the historic preservation issue and whether such enhancements are justified or allowed.

It was also discussed during the meeting that the Circle Park is in the National Historic Registry and it’s possible that neither concept can be installed due to development regulations.

At the meeting on the amphitheatre, 15 St. Armands residents spoke. 15 of whom spoke.  Some were in favor of the amphitheater, none were inn favor of a carousel and many want it simply left alone as a quiet park much like a European square surrounded by merchants.